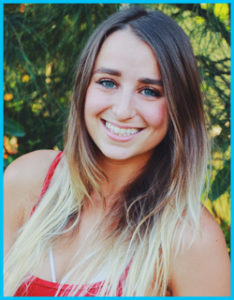 Veronica is lucky, in that she gets to claim multiple towns as her home. She was born in San Diego, California and at the age of three (3) her and her family moved to New Orleans, Louisiana. As a child of artistically inclined parents and being raised in the unique city of New Orleans, it was inevitable that her upbringing was inspired by a curiosity for life.

She dabbled in gymnastics and cheerleading at a very young age, but never got hooked on team sports or physically demanding activities … until yoga. She had attended a few Raja classes here and there with her mother at the Anuttara Yoga Shala and that childhood curiosity grew stronger. In 2014, Veronica attended a class taught by NamaStacy Founder, Corbin Stacy. In that class, with the music blaring and sweat dripping, she discovered a different kind of yoga. One where a higher level of power and strength within herself emerged. It was then that she was hooked.

The joy and awakening that yoga continues to bring Veronica is a personal discovery that she felt she had to share. So, in an effort to inspire and guide others to begin their own journey within themselves, she has chosen to become a Barkan Method trained yoga teacher.

Eternally grateful beyond words, this opportunity given to Veronica from the NamaStacy Yoga Corporation® is a blessing. Veronica is committed to paying it forward by sharing the joy of yoga with the world, starting with one yogi at a time.