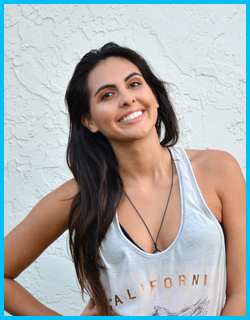 Sofia Uriarte started practicing yoga consciously in 2014. She says consciously because while undergoing a multitude of trials and tribulations within her own life, she discovered that yoga was so much more than just the asanas on the mat. She found that yoga quickly became her sanctuary; it gave her a sense of community, stillness in a world of stimulation, and peace even in her constant mental chatter. Slowly, after so many years of negative self-beliefs she began to learn how to listen to her body, be present in the moment and love herself again. Through yoga, she began to let go of the illusion of control and surrender to her vulnerabilities only to discover they were her strengths.

In the summer of July 2017 she mustered up enough courage to travel to Koh Phangan, Thailand on a solo trip to complete her 200 hour yoga teacher training. She describes the experience as life changing, as the program reaffirmed to herself the depth and beauty that lie in the path of a yogi. A sense of peace grew upon her with the realization that she found her home in choosing yoga not only as a daily asanas practice but as a lifestyle.

Today, as a Vinyasa Teacher, Sofia finds herself falling in love with showing beginners the basics of asanas and meditation. She enjoys helping others alleviate tension in the body and seeing the light in their eyes as they master new poses. Committed to staying curious, she continues to take yoga workshops, study yogic philosophies and various styles of mediation.

Beyond teaching yoga, Sofia is a student at Florida Atlantic University majoring in Sociology with hopes to pursue her masters in Occupational Therapy. It is her vision to combine yoga and therapy together to unlock her client’s fullest potentials. When not consumed by school, Sofia tries to travels as often as possible; allowing the world to be her teacher and forever remain in awe of its wonder.

In the midst of her yogic adventures and in the process of seeking a mentor to further her teaching potential, the universe brought her and Corbin together during a rooftop yoga event where she was gifted the opportunity to join the NamaStacy Yoga Corporation! She would like to acknowledge Corbin for his generosity and his beautiful light energy that surrounds all in his presence. Sofia is beyond grateful to join the community of yogis and deepen her practice with teachers she’s looked up to as a beginner. With the intention of only love, Sofia vows to align herself with her truth by paying this gift forward one yogi at a time.