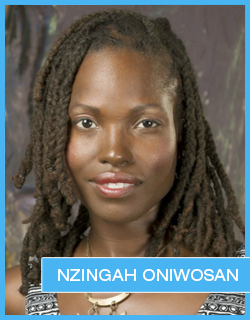 Nzingah’s yoga journey started when she was ten years old. She saw a yoga program on television and fell in love. Ten years later she still had an infatuation with yoga. She was able to take classes at FAU. During this time she discovered Bikram yoga, and other forms of Hatha yoga. In 2012, Nzingah had her breakthrough, insomnia, and stress had overtaken her; a small voice said, “YOGA.” She began practicing at least four to five times a week and the miracles began. Her insomnia dissipated, she had lost thirty pounds and felt great in her body, and found peace of mind. She was inspired to share what she had discovered with the world. The universe welcomed her wish with open arms by providing a full scholarship. Nzingah’s goal as a teacher is to make the gift of yoga accesible for all. To allow everyone she encounters to find the miracles that already lie within themselves so they connect to their MIND, BODY, & SOUL. With the assistance of NamaStacy Yoga Corporation®, Nzingah is grateful to further her education and continue to pay it forward, one yogi at a time!