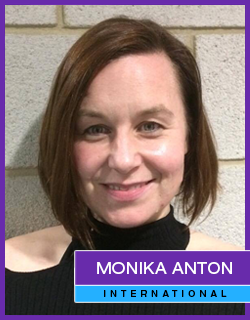 Monika (Mon) as she loves to be called was born in the UK but has lived since she was 5 in Poland, France, Spain, Belgium and Germany. Mon’s family is originally from Poland. Mastering Polish at an early age she quickly became multi lingual with a natural ability to adapt to changing cultures and learn new languages. Mon has mastered Polish, French, Spanish, Italian and German. Her passion for languages also led her to study Chinese at night school for two semesters! Mon’s ability to interact and connect with other people has led her to an international corporate career in Translation/Teaching/Hospitality & leisure working in Brussels, London and Berlin. Her work at the helm of many transformation projects has taken her to China, Australia, the US and all over Europe. Mon is a true citizen of the world with a global outlook that is rare.

Mon has always been musically gifted and this led her to take up salsa in her early 30s’ Recognizing that the body was as much of an instrument as her voice, she realized that the only way of readjusting her body through hours of training was through restorative Asanas. The turning point was her travel to Australia in 2013 where she spent a few weeks in the Daintree forest undergoing a yin yoga immersion course with deep meditation. Whilst Mon has always “lived life to the max” it was only through yoga that she understood the transformative power of living in the moment and how harnessing her mental and spiritual strengths could make her a more insightful, strong and thoughtful individual – both to herself and others.

Since starting yoga Mon considers herself more self-aware, kinder to herself and to others and with a real compassion to all living beings. Her trip to Vikasa, Yoga in August 2016 was a real tipping point, where she recognized that her real path was in self transformation. It was both an enlightening and scary experience as she felt the tremendous power of her own unleashed potential. Mon is now embracing her teacher training at Vikasa in April 2017 and passionately follows classes several times a week in London where she permanently resides. It has offered her real release, a real insight into her own potential as a human being and she is ready to embrace the full challenges that this brings; paying it forward, one yogi at a time!