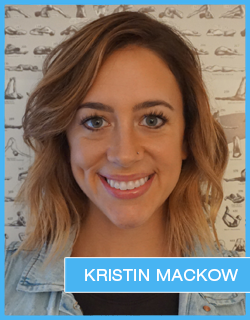 Kristin Mackow works as a teacher of students with specials needs in Palm Beach. She is involved in the Samaritans Club as well as Girls on the Run; a girls’ empowerment and leadership organization. During the summers Kristin is a trip leader for community service teen tours that serve around the world. Kristin tries to live a conscious life that spreads joy to others, both on and off the mat.

Kristin is originally from Buffalo, New York where she grew up in a big, happy family. Her and her siblings were always competing in sports and being active. Her athleticism later evolved into fitness and dance. As a spin, aerobics, and zumba instructor, Kristin was always moving. The need to move and her interest in spirituality led her to her first yoga class in 2008. During the next 5 years Kristin moved numerous times, and changed paths and plans, but always returned to her mat.

When living in New Jersey Kristin closely studied Christian Valeriani, who proved to be a pivotal person in her journey to teach. With his knowledge of the physical body and integration of philosophy, Kristin was inspired to pursue the idea of teaching. She completed her 200 hour teacher training at Bodhi Hot Yoga in 2015. As a lifelong learner, Kristin takes every workshop she can, and tries to soak everything up from the yogis around her. The community at The Yoga Joint has been the perfect place for that.

This opportunity from the NamaStacy Yoga Corporation® is graciously and humbly accepted.  Kristin is filled with gratitude and excitement at the opportunity to share her practice with others in this amazing growing community in South Florida. Keep your eye out in the community because Kristin plans on paying it forward, one yogi at a time.