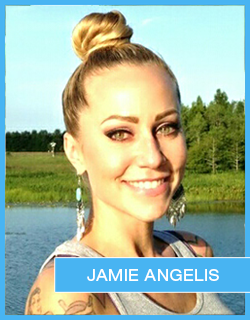 Jamie Angelis is a devoted single mother, a passionate person, and an eager learner. Jamie started tap, ballet, and gymnastics at the age of 3 yrs old in New York. At the age of 7 Jamie and her family decided to relocate to Coral Springs, Florida where she continued her love and practice of gymnastics. During her high school years Jamie decided to focus her energy on cheerleading. After high school Jamie went on to college for a few years, but was no longer involved in gymnastics or cheerleading. No longer active and feeling a sense of being lost in the world in her twenties, Jamie discovered yoga and was hooked. Yoga gave her inspiration, motivation, and passion for life again. She continued to practice yoga, with the hopes of someday becoming an instructor and the pursuit of doing something that brought her joy every day.

A few years later Jamie got married, had her son Joseph, and then divorced all within about 3 years. During that time Jamie had to put her love for yoga on hold and shift her focus on being a new and single mother. Going through those hard times and feeling defeated, she looked again to make some positive life changes for her and her son. Jamie returned to college and received her Bachelor’s degree from Florida Atlantic University in 2013 and revisited her yoga practice. Jamie enjoys connecting with others that are also facing life’s challenges and desires to pay forward, one yogi at a time, like the NamaStacy Yoga Corporation®. She also wishes to offer assistance to other busy moms, and their children, to take classes and time out for themselves, in order to help better their lives.