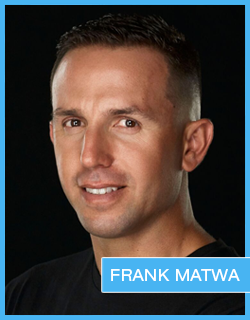 Frank Matwa was born in Puerto Rico, and has been an active person starting at an early age. He found a love for the ocean when his parents would bring him camping on the beach in Puerto Rico. As Frank got older he harnessed his passion for the ocean and started sailing around the world. Some of the places he has sailed to include various western European countries, and several islands in the Caribbean.

At the age of 15 his father brought him into the family business where he learned construction, metal fabrication, and project management. As he grew older, an opportunity to apprentice under a design firm presented itself, where he learned interior design and became Master Faux Painter. One of his most note-worthy projects is Park Avenue Paper Chase, which is custom metal artwork by Alice Aycock, an American sculptor.

Recently, he was working in the oil fields in the Gulf of Mexico, where the living conditions were having a negative impact on his health and overall wellbeing. He resigned from his position two years ago and was looking for a way to get healthy again. On his quest to improve his health, he discovered yoga and the amazing health benefits that go along with it. Frank has been practicing yoga for well over a year now and has seen a positive change in how he feels mentally and physically.

Frank is honored for the opportunity that NamaStacy Yoga Corporation® has afforded him to learn from Jimmy Barkan at The Barkan Method and looks forward to sharing his knowledge with the entire yoga community of South Florida.