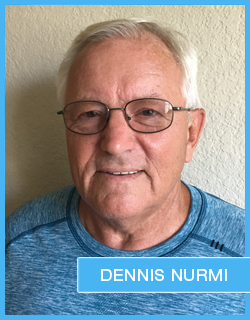 Dennis was born and raised in the small beach town of Niantic, Connecticut and is the oldest of three children. He graduated from New London High School in New London, Connecticut.  Shortly thereafter, he joined the United States Air Force (USAF) where he served four years as an aircraft mechanic. Through the USAF he traveled to Japan and South Korea. Upon returning to the civilian world, Dennis attended Farmingdale State College in New York, where he attained his FAA Airframe & Powerplant License (A&P License) which enabled him to pursue a career in the aviation industry. In June 1972, Dennis became employed at Grumman Aerospace Corporation as an aircraft mechanic. During his employment there he had many opportunities to travel and experience different cultures and lived in a variety of beautiful places. In 2014, he retired from Northrop Grumman after 41 years. Later that year he moved to Boynton Beach, Florida where he currently resides with Donna Nurmi, his wife of 32 years.

In 2011, Dennis found himself looking for ways to improve his health and fitness level while avoiding injury. It was then he was encouraged to try yoga.  Dennis was reluctant at first, but felt compelled to give it a try.  He attended a month-long beginner yoga class at Hot House Yoga in Virginia Beach and quickly overcame any apprehension he had about yoga.  He quickly embraced the philosophy and benefits that yoga offers to the body and the mind.  He came to realize that yoga is not only about flexibility, but about building strength in the mind as well as the body. Currently, Dennis practices yoga at The Barkan Method Hot Yoga in Boca Raton where he practices 4-5 times per week. He has lost nearly 40 lbs, is more flexible, and has seen an increased ability in his strength. He is mentally and physically dedicated to his yoga practice. He hopes that he serves as an inspiration to others that yoga is for everyone; no matter one’s age, ability or fitness level. One yogi at a time!