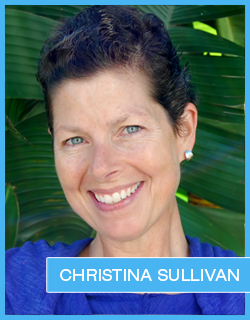 After being a runner for many years, Christina discovered yoga in 2012.  Exercising has always been a part of her life and by the age of 35 Christina had earned a black belt in Tae Kwon Do and participated in various races. Although she has always enjoyed and pursued rigorous endurance type of activities, after completing the Goofy Challenge – which is running a Half marathon and a Full marathon within the same weekend – she found her hips appeared to be unable to tolerate any more running. This was her primary reason to try a yoga class. Like many of us, Christina had some pre-conceived notions about yoga and she had believed it would be slow and boring.  However, her first yoga class, a Hot Vinyasa at the Barkan Method with Corbin Stacy, proved that yoga can indeed be physically challenging and very fun.

Christina’s regular and consistent participation in classes brought great results, her hip pain, as well as the occasional back pain and carpal tunnel, improved considerably. She also found yoga to alleviate anxiety and depression symptoms, and it also improved her focus and concentration. Christina began sharing yoga breathing and postures with her 11 year old son, who has autism. Her son began doing yoga before bedtime to help him sleep better and manage his own anxiety, improve his ability to self-regulate and increase his body awareness and focus.  Both Christina and her son currently attend hot Vinyasa classes together. In 2013-2014, Christina shared her love of yoga with her son’s then 5th grade class and they continue to visit his former elementary school to share yoga, meditation, and mindfulness with the current students.

In January, 2014, Christina was diagnosed with Stage II Breast Cancer. She underwent several biopsies, surgeries and chemotherapy. She continued her yoga practice during this time and incorporated more meditation and mindfulness practices. She used various breathing techniques to cope with the anxiety she felt while undergoing these invasive procedures and found yoga to be extremely helpful. A regular, though modified, yoga practice facilitated faster healing from the biopsies and surgery and chronic arthritis after chemotherapy. During chemotherapy, she was often too physically sick to attend formal classes and could generally only make it to a class a month. Once treatment was complete, she resumed her practice and has since wanted to continue to explore ways to share the scientifically demonstrated healing benefits of yoga with the broader community, particularly since she has observed the benefits of yoga with children in her private practice as well.  Her plan is to obtain a teacher certification that will complement her Masters degree in Social Work and bring the healing tools of yoga, meditation, and mindfulness to cancer patients’ homes.

In addition to her own personal experience of the healing power of yoga, Christina is a Licensed Clinical Social Worker and her expertise is in working with children with autism, ADD/ADHD, social learning and communication challenges and mood disorders.  She found incorporating the tools of yoga have been extremely beneficial to her clients.

An avid learner, Christina has found ample research on the science of these tools and believes that if cancer patients are taught appropriate tools upon diagnosis, along with other therapeutic interventions, their long-term outcomes may become more favorable. Even if the patient’s prognosis is poor, he or she can still benefit from coping tools to endure the shock of hearing about their life threatening illness and the various invasive and traumatic procedures that often accompany a cancer diagnosis.

Research suggests that yoga helps to heal post surgery symptoms, improves oxygen flow, decreases stress and anxiety, and that regular practice can turn off cancer genes. Additionally, consistent yoga practice feels good, both physically and mentally. Like the NamaStacy Yoga Corporation®, Christina plans to “pay it forward”, and to bring these services to patients’ homes, as well as facilitate a not-for-profit organization in order to assist with funding for those who would not ordinarily be able to afford them.