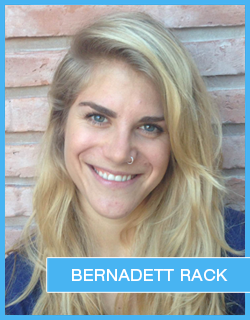 Bernadett took her first Bikram yoga class in 2009 and since then yoga became a part of her life. It quickly took a prominent role in her own path towards self-improvement and development. She was so impressed by the power of the classes that she decided to learn more and fully immerse herself in her practice. In 2010 she completed the Bikram Yoga Teacher Training and has been a full time teacher since then. She taught in her native Budapest for a while, then set off, getting the opportunity to visit and teach at various studios around Mexico.

While travelling, she began to explore other types of yoga, eventually taking a course with Jimmy Barkan of The Barkan Method. There she met many wonderful yogis that further helped her development as both a yogi and a teacher. It became clear to her that she wanted to keep going, not only for the benefits to her own practice and life but also for the effect she was having on those she had been able to teach.

The freedom and flow of Vinyasa has opened a new world to her and she is very grateful for the opportunity that the NamaStacy Yoga Corporation® has provided. Bernadett is excited to move forward in a new Yoga Alliance recognized teacher training course to expand her knowledge and more importantly, to share that knowledge with others … Paying it forward, one yogi at a time!