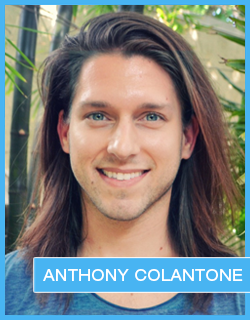 Anthony is from small town Ohio where he trained and focused his time on perfecting the art of dance. Despite having back problems from a young age he went on to dance professionally in a dance company touring Europe. While performing, he sustained a severe back injury that herniated his lower spine, ending his career. During this difficult time, he started his yoga practice with the hope of healing his spinal injuries. Along with a complete physical recovery came a mental clarity that helped him adjust, and accept the reality of his situation. Moving forward with more peace he knew it was just the beginning of a long, beautiful journey and a deep relationship with yoga. He was hooked!

Seeing the transformation within himself, he immediately knew that he wanted to share this practice with his family and friends, and help anyone suffering from injury to heal naturally. After living in New York City working odd jobs, he decided to move to Florida. There was no more time for excuses, and the timing felt right to pursue his dream of teaching. He visited yoga studios looking for work and was given a position working the front desk at The Barkan Method where he immediately felt at home.

Getting to know the wonderful yogis of south Florida,and opening up about his desires to be an instructor, he was guided to the NamaStacy Yoga Corporation®. He feels honored and truly grateful to be given this opportunity, and looks forward to being apart of such an amazing community. Giving back is a big goal of his, and he hopes to do as much as he possibly can, starting with paying it forward, one yogi to the next!