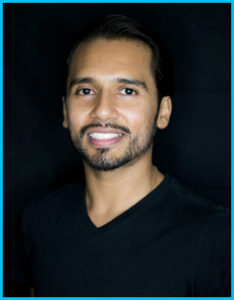 Amir Ferouz was born in Georgetown, Guyana, where he and his family lived for the first 12 years of his life. It was here that Amir was first exposed to Hatha Yoga by attending Sunrise classes with his mother who practiced with teachers from India. Although it seemed alien at the time, Amir marveled at his early teachers’ strange breathing techniques and custom of massaging the sweat back into their skin after practice. Amir attributes this early exposure to yoga as fundamental in shaping his attitude, persistence and discipline in any task he aspires to. Also, this part of Amir’s life is very grounding for him as it serves as a reminder of where he comes from and the struggle and beauty of other cultures in our world.

After moving to South Florida in 2003, Amir focused on his academics and never practiced yoga again. In fact, he never considered himself athletic or coordinated enough to play sports and he could barely touch his toes! Amir attended Stoneman Douglas High in Parkland, Fl and went on to finish an Engineering Degree at Florida Atlantic University in Boca Raton. After college, Amir felt an overwhelming disconnection with his body/spirit and needed to reconnect again. This time yoga found him. Amir began practicing at his local LA Fitness, where he rediscovered yoga’s uplifting and self-empowering properties. Amir sought out a deeper practice at Anuttara Yoga Shala in Deerfield Beach where he went on to complete an Advanced Vinyasa training in the summer of 2016. Amir describes a “switch” that occurred in his way thinking when he started practicing daily. He knows that yoga has made him stronger, more content and positive in his outlook on life.

As a Vinyasa teacher, Amir loves introducing first timers to yoga. He enjoys the journey students experience in going from “tight hips to open hips” and how transformational this can be for a new yogi! Beyond teaching and practice, yoga has given Amir a cOMmunity that he values dearly. He has made lifelong friends and cherishes the knowledge and spiritual guidance he receives from all of his teachers throughout South Florida. He is a strong believer in experiencing variation, being uncomfortable and growing stronger from this uncertainty and self-doubt to reveal the true beauty on the inside. Amir believes yoga is not your lifestyle; it’s your life, a happy, full life, and is excited to pay it forward, one yogi at a time!