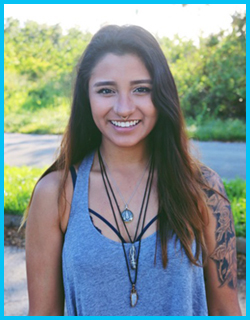 May was born in Bogota, Colombia. She had the greatest opportunity to be able to move to the United States when she was 15. Her and her parents had struggled in the United States for a long time due to being immigrants. Until, one day, her parents finally saved up enough money to become citizens – making May an American.

Once she started high school she tried to “fit in” which lead her to explore with many friend groups and unfortunately became lost in the darkness. Soon, she lost faith in the higher power and herself. To try to find peace of mind, May turned to bikini body building and worked very hard on her body to become the physique she wanted. Until, early February in 2017, she got into a very bad car accident that ruined her opportunity to lift weights. She thought she was broken.

Thankfully, her boyfriend showed her another alternative to find peace and that was through meditation. When she turned to meditation, she found yoga. Beginning to do yoga, she began to regain self-love and love for others. With such a life changing experience, she knew she wanted to share the power and tranquility that yoga gifted her- to others. She started signing herself up and friends to join her on the journey of life fulfilling and belongingness. You will definitely see her around doing yoga with her 62-year-old father, who she thanks for the encouragement and love he gives her. “I want you to chase your dreams and share the love you receive” he told her when she explained that she wants to pursue yoga as a way of being and giving back, one yogi at a time!e.